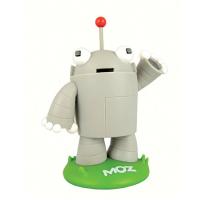 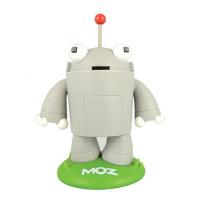 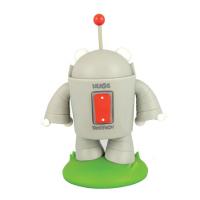 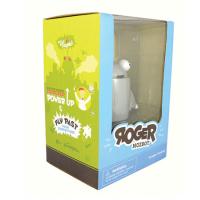 Happy Worker is always on the look-out for terrific brand characters, so the day that Moz called us about turning Roger Mozbot into a toy was a glorious one! Roger Mozbot is the endearing robot mascot of Moz, and as the front-line face of their powerful web presence, we had seen him around the internet for a while (and loved his googly eyes).

Moz had dreamed about “toyifying” Roger for some time. They had researched a variety of toy companies, looking for the right partner to bring the toy to life. For Moz, this wouldn’t just be a toy – it would immortalize the brand and give them an opportunity to connect with clients and share happiness with them over the coming years via this desktop collectible. Moz’s creative team had even sculpted a number of hand-made Roger models in an effort to work out the right size, pose, and details for the future toy – seriously creative work.

Moz offered up their in-house sculptures for reference, wanting to take the final toy to the next level in robotic awesomeness. Happy Worker began gathering other references – Roger’s common poses and expressions, brand info, his beginnings (as an empowered espresso machine) and even his accessories (keytars and such… you know, typical business accessories).

As we listed Roger’s specifications (height, packaging details, pose, etc.), one question came up: would he have any moving parts (a.k.a. articulation points)? These joints are what turns a normal figure into an action figure and lets the owner pose their figure in playful, funky ways. Together we decided that Roger’s arms and head would turn 360 degrees. Roger could be posed to ask for a hug, soar, reach for the sky, shake his head in disapproval, and come to life. The switch on his back would not be articulated; Roger would permanently be set to “HUGS” (he’s not really the destructive type).

With all of the nitty gritty details decided, Happy Worker dove into prototyping. We started by designing a 3D model of Roger using Zbrush. Roger mainly appears on the web as a 2D character and converting any 2D character to 3D involves some interpretation and tweaking to get the character to look right. For engineering to-dos, we added in the joints and deconstructed Roger’s body parts as needed (to be able to get pieces out of molds, mainly). For example, Roger’s arms are made of two parts each that are glued together, and the antenna and base are separate parts. Some parts would be rotocast while others would be injection molded, so the model was tweaked with the molding approach in mind.

Once we finished everything we could possibly do on the 3D model, it was time to get hands-on with a real-life prototype. From the approved 3D model, a rapid prototype was created. This was molded and several casts were made.

One cast went on to become a paint master. This fully-painted Roger would act as a template for the painting of all toys in the production run, and the colors were matched exactly to Moz’s Pantone colors. Another cast was tweaked further for engineering reasons: to ensure good fit between the parts, a seamless look when glued together, and smooth twisting of all joints. This cast was used to make the final tooling we’d use to clone Roger on the production line.

Moz designed an awesome window box: the package where Roger Mozbot would live his days out until removed by bot-loving fans. Moz created a work of art in package form – complete with mad scientist-type graphics, the story of Roger’s beginnings, and bits of internet geekery. Happy Worker proofed and produced the window boxes, as well as the clear plastic blister that holds the toy in position inside the box.

With the flip of a (figurative) switch, production began for the toys and their packaging. Once assembled and packaged, we prepared the toys for shipping. As a surprise for the holidays, we shipped a small batch to Moz’s office. Staff who had seen Roger hundreds of times before in 2D were delighted to encounter him as a 3D toy!

The rest of the toys went to Moz’s warehouse to lay in wait for real-life. In 2013, Moz completed a big re-brand, going from SeoMoz to Moz. With the new brand unleashed on the web world, the Roger Mozbot toys were gifted to unsuspecting attendees at MozCon and sent out to clients.

We gave out Rogers at our user conference, MozCon… and people are crazy about them. They absolutely love them. No negative comments. Not one.

Thank you so much. Happy Worker has been a wonderful to work with. You guys are super helpful and professional. Roger came out AMAZING!

The Evolution of Roger